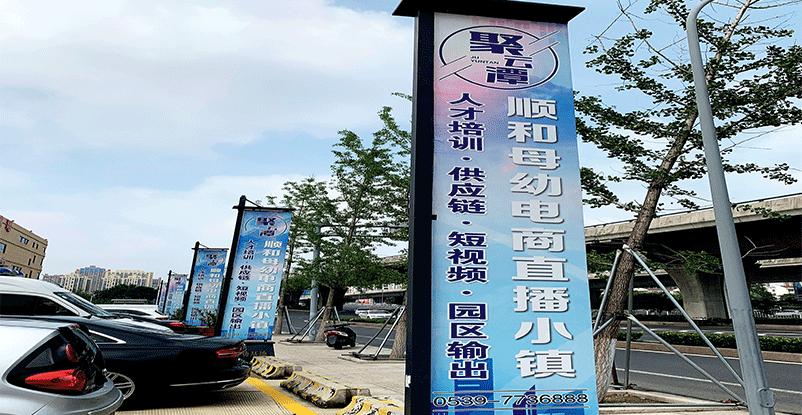 The city of Linyi has become a center of the livestreaming sales sector, providing facilities and services to cuts costs and boost sales. As businesses eye the Linyi model, no one is sure whether its success can be replicated 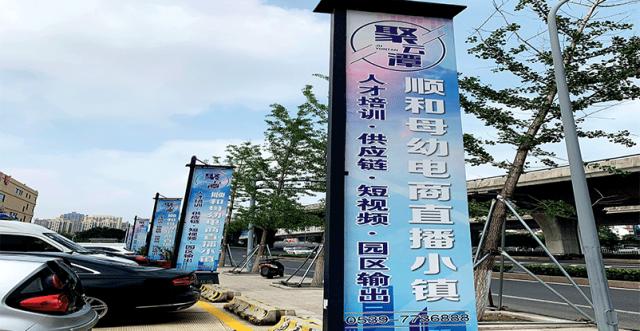 An advertisement features livestreaming training lessons and logistics in the city of Linyi, an e-wholesale town in Shandong Province

By 8pm on a typical evening, the row of studios in a livestreaming center in Linyi, Shandong Province have signs on their doors which say: “Livestreaming, please do not disturb.” It is the busiest time of day. The exhortations to buy ring out. “Sweeties, look at this pair of shoes. Selling for only 19.9 yuan today. Be quick,” or “Guys, this hoodie is all cotton. On sale today.”
Now famed as an e-wholesale town, Linyi has 10 livestreaming centers from where thousands of livestreamers sell just about anything. According to local media, these livestreamers collectively have more than 300 million followers and receive about 1.5 million orders every day.
This rising prosperity has attracted officials and businesspeople from other cities to learn from Linyi, hoping livestreaming centers can offer a way to revitalize their Covid-hit local economies. But no one is sure whether the Linyi model can be transferred to other places where the conditions may not be as conducive to success.
Linyi Model
According to Nie Wenchang, president of a digital technology company in Shandong which opened a livestreaming center in Linyi, the city leads the online sales sector because of its geographical advantages. In the south of Shandong, Linyi is midway between Beijing and Shanghai, and since the 1980s, the third-tier city has marketed itself as a place to do business.
Since the trade in small commodities started four decades ago, the city’s street stalls have morphed into China’s biggest market cluster, with 134 wholesale markets containing 65,000 stalls and shops. The markets employ around 300,000 people and goods are shipped across the country.
Yet in 2018, sales declined as wholesale markets popped up in other cities and counties. Stall rental increased while the number of customers decreased, particularly as e-commerce put a dent in Linyi’s wholesale business.
Nie had already shifted his business online in 2007 when he opened a shop on Taobao, China’s biggest e-commerce platform owned by Alibaba Group. Later, he started helping other sellers operate online shops. In 2014, Nie’s company shifted to running an e-commerce industrial zone focused on helping vendors increase sales and reduce logistics costs.
During this process, Nie’s team observed that livestreaming had a big influence on e-commerce, so they built 20 livestreaming studios. As Taobao increased the standards for sellers, some turned to popular livestreaming short-video platforms such as Douyin (China’s version of TikTok) and Kuaishou, also known as Kwai.
Wang Xinyan livestreams on Kuaishou. Having sold clothes for more than a decade, she started livestreaming sales in 2018. Although she had few followers when she started, later her sales volume from livestreaming doubled her offline sales. When she reached 50,000 followers, Wang and her husband rented a 700-square meter studio to concentrate on online sales. She said that many of her peers did the same around that time.
In 2018 Kuaishou and Douyin decided to prioritize e-commerce, supporting users to open online shops on the platforms. “The cost of attracting customers to popular e-commerce platforms like Taobao was very high, so I suggested that the local commerce department should make a change, and they finally cooperated with Kuaishou,” Nie told NewsChina.
According Caas Data, a Chinese video app analyst, at the end of 2019 Linyi was the ninth-ranked city measured by the number of livestreamers on Kuaishou, the only third-tier city to break into the top 10.
This prompted more Linyi businesses to shift from offline shops and WeChat to Kuaishou. This meant more demand for services related to livestreaming. “When we started, we hoped we could help offline businesses transition and upgrade, so they could offer another sales channel,” Jia Hangzhou, a head of another livestreaming center in Linyi, told NewsChina.
As pioneers, Nie and Jia had no clear ideas about how to build and operate a livestreaming center. Mostly they repurposed existing commercial properties.
Wang Xinyan moved to Jia’s livestreaming center soon after it opened in early 2019. “The rent was similar to other places, but they are more experienced in e-commerce and livestreaming operations,” she told NewsChina. 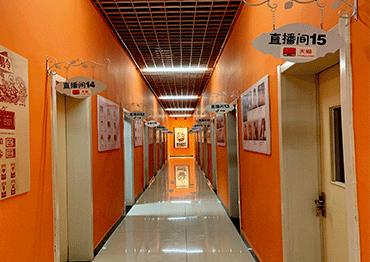 Broadcast studios line a hallway of a livestreaming center operated by Nie Wenchang, president of a digital technology company in Shandong Province

Broadcasters work at a livestreaming center in the city of Ruili, Yunnan Province, October 22, 2019